A month ago after watching Evil Mode: Or, How I Learned to Stop Worrying and Love Emacs I felt tempted to test GNU Emacs.

At first it was pretty confortable, specially because I started using it with evil-mode, that makes possible to use the editor through the Vim’s keybinds.

In a short period of time my .emacs became bigger. Even without any lisp expertise (elisp in fact), it’s pretty easy to set up some configurations. That’s something pleasant I’ve found.

Later I’ve discovered it’s great configuration environment. If you type customize in the command prompt, it’s possible to search for configs, change parameters for the current session or even authorize to write them in your .emacs. Have a look at the main customization screen: 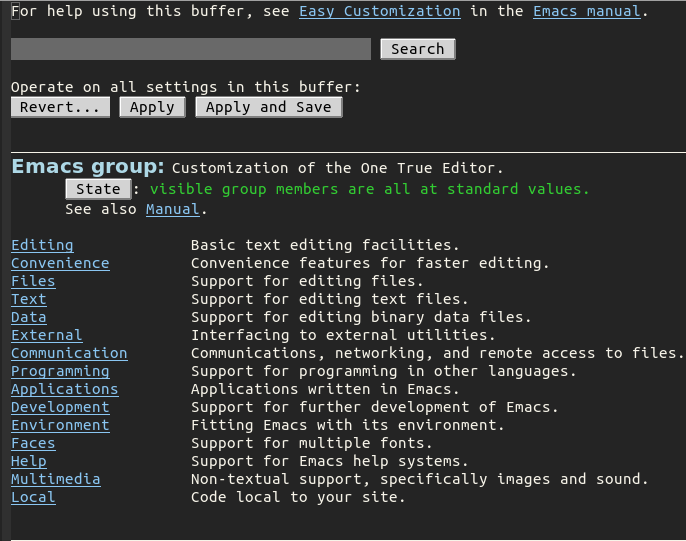 Another nice thing I’ve discovered is called org-mode. It’s a powerful and complete task manager. What’s most interesting in it to me is the ability to create and manage tables. It’s a piece of cake. You can insert, move and remove columns, sort data, among other features. After some time I’ve looked for something similar to Vim and I’ve found. Unfortunately I haven’t tested yet.

During the last weeks I started to use Emacs without the evil-mode most of the time. It isn’t easy, but the experience seems to worth. My productivity isn’t the same, but I remember the beginning with Vim wasn’t easy too.

I’ve heard that Emacs users tend to do almost all inside the editor. At the moment, it doesn’t seem interesting to me. Every addition requires new plugins and extra key combinations. I could use Twitter through Emacs, but I still prefer through the web browser.

Up to now my feeling is that I have to press to many keys for some simple actions, or that the most used keys aren’t so well located. My mind can be changed, but I guess it’s too soon to be sure. Anyway I’ll try to share the evolution of my experience.

For the curious ones, I think interesting to have a look at Emacs Rocks!. This video series show some really nice features and plugins, like restclient-mode, which is already in my .emacs.

To finish the post I recommend you to have a look at the video I mentioned at the beginning. At least the hands on moment. 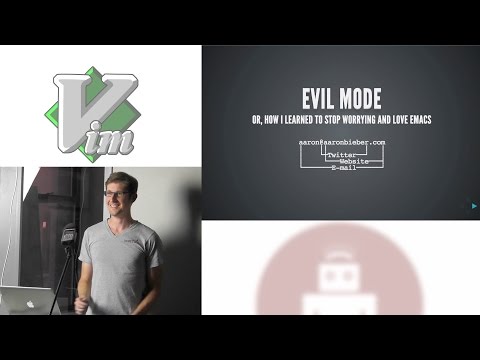